Despite being produced explicitly as a propaganda film during World War II, this adaptation of Ted W. Lawson’s account of his own experiences as a pilot during the famous Doolittle raid on Tokyo is a remarkably authentic account of the daring air attack on April 18, 1942. Still, some elements of this are sufficiently dated that this is one classic film that could stand a modern remake.

Beginning in February of 1942, Lt. Colonel Jimmy Doolittle (Spencer Tracy) begins to assemble a squadron of volunteer aircrews for a top secret mission. The film focuses on Lt. Ted Lawson (Van Johnson), a recently married father-to-be, his crew and his best friend, Lt. Bob Gray (Robert Mitchum) as they begin to learn how to do things with a B-25 Mitchell bomber that it was never designed to do, like taking off in less than 500 feet from a standing start, while trying not to speculate about why they doing such strange things to their airplanes. It’s not until they get to California and see their beloved planes being hoisted onto the deck of the carrier Hornet that they begin to figure out what the audience already knows.

The flying sequences, using actual B-25 bombers, are nicely authentic and give the movie an air of realism that tends to evaporate the moment someone opens their mouth. The dialog is extremely dated and often delivered with all the naturalistic subtlety of a middle school Easter pageant. When the planes are on the ground, this movie morphs into an episode of Beaver Cleaver Goes to War or Colonel Doolittle Knows Best. “Gosh, Colonel Doolittle, the Navy sure is a big help, isn’t it?”

For his part, Spencer Tracy seems to be on a completely different plane as the rest of the cast. Colonel Doolittle is rarely seen except to make speeches to the rest of the pilots, but with Tracy’s characteristic matter-of-fact delivery, which is as contemporary as the rest of the acting is hopelessly stuck in the forties.

For a war film of its day, Thirty Seconds is a surprisingly long movie, running well over two hours and covering the training, the mission and its aftermath in equal detail. After bombing Japan, the planes fly on toward friendly areas of China. Because the carrier was spotted by a Japanese patrol, however, they have to launch early, much farther from Japan (and China) than they’d like. As the result, most of the planes run out of fuel, including Lawson’s, and crash in Japanese-held territory. Lawson’s leg is seriously injured in the crash and becomes infected as Chinese guerillas try to keep him and his crew out of Japanese hands. 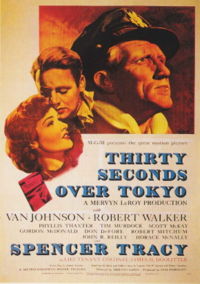 Made during the war, this movie is, of course, as much propaganda as entertainment. The aircrews are all enthusiastic and no one ever gripes. The wives of the married pilots know their role is to support their husbands and not complain about being home alone while he is off doing his duty.

The film also extols the virtues of America’s Chinese allies during the war. As a result, the portrayal of the Chinese characters, while still stereotypical, is probably a lot more enlightened than other films of the same period. One scene, in which Chinese children serenade survivors of the mission with a rendition of “The Star-Spangled Banner” in their own language, can’t help but tug on the patriotic heart strings of all but the most cynical.

Thirty Seconds Over Tokyo is one of the more effective examples this kind of wartime filmmaking, effective as propaganda but also just as a movie, as long as one makes allowances for its occasionally creaky, dated elements.