On Thanksgiving Night in 1976, the legendary rock group known simply as The Band said farewell to touring with a party at San Francisco’s legendary Winterland Ballroom. 5,000 turkey dinners were served. There was ballroom dancing and a poetry reading.

Oh, yes, there was also a concert featuring The Band, joined by such obscure musical nobodies as Eric Clapton, Muddy Waters, Van Morrison, Joni Mitchell, Neil Young and Bob Dylan, just to name a few. To top it off, Martin Scorcese was on hand to film the whole thing. The end result has been called the greatest concert film of all time. I’m not sure that it quite rates that title but it is very good and a priceless snapshot of rock music at that point in time.

The project came to be after keyboardist and singer Richard Manuel was injured in a boating accident. Guitar player and songwriter Robbie Robertson begin to think The Band should end its touring days and become a studio-only band, like the Beatles after 1966. His bandmates, especially drummer Levon Helm, weren’t all that keen on the idea but they went along with his idea of a farewell concert. They probably figured they could either talk him out of it or at least go back on the road without Robertson. In the end, The Band put out one more album before breaking up. It would never perform live in its original configuration again.

In addition to the concert footage, which is some of the best ever captured, there are also interviews with members of The Band conducted some time after the concert. Frankly, I’m not certain how necessary these sequences were because not all of it is all that coherent. Scorcese doesn’t make for the most natural interviewer and some of those sequences seem awkward and uncomfortable. It’s probably not surprising that at least a few of the Band members were on something during the course of their interviews. They have that sense that the interviewee is sometimes searching very hard to come up with the words “the” or “a.” Only Robertson and Helm seem all that coherent and only Helm has anything interesting to say, being reasonably conversant with the history of rock music and how The Band fits into it.

The concert footage itself is where this film shines, as the various songs cut a wide swath through The Band’s most popular songs as well as the classic rock and blues music that influenced. Maybe the most valuable moment in the whole film is Muddy Waters’ blistering performance of “Mannish Boy,” which showed the old blues man still had it. It was only captured via a stroke of luck when the cameraman didn’t hear Scorcese’s instructions to stop filming to let his camera cool down. As a result, his was the only camera running and it was only pure good fortune that it didn’t overheat.

In his autobiography, This Wheel’s on Fire

, Levon Helm criticizes Scorcese and the film for making the group look too much like Robbie Robertson and The Band rather than equals. I think the drummer might protest a little too much, as I believe that Helm and bassist and singer Rick Danko get their due. However, he is probably correct that keyboardists Richard Manuel and Garth Hudson are sometimes forced into the background. At lot of that may be the result of the limitations under which Scorcese’s camera operators were working, but I guess it’s impossible to know at this late date.

For all of its flaws, however, this is one concert film that deserves to be in the collection of anyone who is a fan of this era of both music and film. Many of you probably weren’t even born when a lot of these artists were at their peak, so The Last Waltz is a fantastic two-hour introduction to their music. 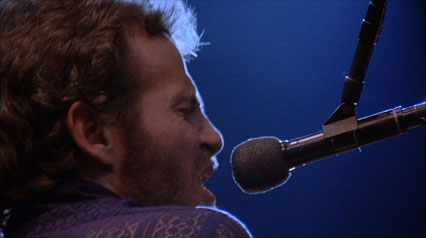