You will soon be standing where we are now.

Only the young and idealistic would believe that they could reverse the course of a murderous regime with a few thousand mimeographed leaflets, but that is what the members of the White Rose, an anti-Nazi student resistance group, tried to do and that is the crime for which many of their members, including 21-year-old Sophie Scholl (Julia Jentsch), were executed.

On February 18, 1943, Sophie and her brother, Hans (Fabian Hinrichs), were arrested in the atrium at the University of Munich for distributing leaflets saying that Hitler’s war was unwinnable and would only lead to more senseless deaths. They had mailed out the first five, but the night before they had printed more than copies of sixth then they had envelopes. In a burst of foolish confidence, Hans decides to distribute them the next day at the university. His comrades, especially Willi (Maximilian Brückner) think he’s crazy, but his sister decides to help him. Everything goes well as they surreptitiously leave piles of them around the building, until Sophie impulsively pushes a stack over the railing into the courtyard below. They are spotted and arrested.

The bulk of the action takes place in the office of Inspector Mohr (Alexander Held), the Gestapo official assigned to interrogate Sophie. At first, she denies any involvement but Mohr amasses more and more contradictions in her story and evidence of her guilt. Eventually, Sophie confesses and their dialog begins to shift from an interrogation to a debate in which the young college student holds her own against the man trying to intimidate her.

Wisely, they don’t turn Mohr into a simple monster. More than just doing his job, he seems to genuinely believe that if he can turn Sophie against the other members of the White Rose, he can “save” the young girl from her misguided impulses. His emotions run the gamut from anger through exasperation to eventually grudging admiration for her quiet, sincere stoicism. 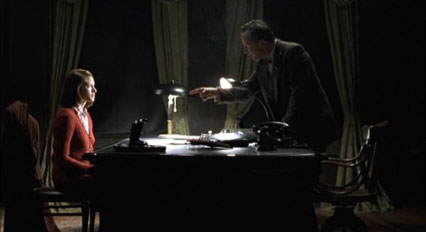 When she is not being interrogated, Sophie shares a cell with Else (Johanna Gastdorf), jailed with her husband for being a Communist. The older woman offers what comfort and advice she can, perhaps knowing even before Sophie does that the young girl is doomed.

Sophie, Hans and their friend, Christoph Probst (Florian Stetter) are tried four days later before Dr. Roland Freisler (André Hennicke), a notoriously fanatical Nazi “hanging judge.” Actually, “tried” is probably the wrong word, since the whole purpose of the proceeding is for Freisler to publically berate the defendants in the name of National Socialism before sending them off to the guillotine later that same day.

Based largely on official records and eyewitness accounts of those five days, Sophie Scholl: The Last Days is not particularly plot driven. We follow Sophie through events over which she has little control. Still, despite facing imprisonment or worse, she manages to occasionally turn the tables on her captors and earn some admittedly Pyrrhic moral victories. Pretty but not glamorous, Julia Jentsch is near-perfect in the role, portraying Sophie’s quiet courage and moments of vulnerability with equal ease. I never once caught her “acting.”

Some might be tempted to draw political parallels between this story and our current political situation. Admittedly, some of the appeals by Nazi officials for wartime patriotism and duty might sound uncomfortably familiar today, but in reality such appeals would be familiar to people under many different governments during wars, both just and otherwise. Every government makes similar appeals to patriotism under wartime conditions and, in some cases like the U.S. during World War II, it was justified. It is the government that makes the appeal immoral, not the other way around. Until some moonbat with a “9/11 was an inside job” web page is thrown in jail and executed after a brief show trial, such parallels exist only in the fevered imaginations of a small lunatic fringe.

Appreciate Sophie Scholl: The Final Days for what it is: a deeply affecting examination of quiet courage in the face of monstrous evil. 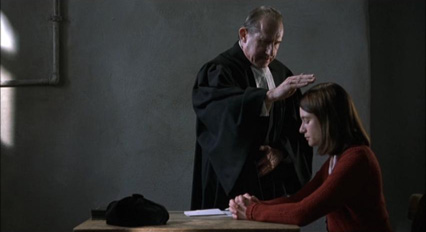 No one loves more than one who dies for friends.