144 years ago this coming week, a Union regiment from Massachusetts led a futile assault on a Confederate bastion near Charleston known as Battery Wagner. As Civil War battles go, it was relatively minor and would normally go unremarked compared to the Battle of Gettysburg and the fall of Vicksburg, which both happened at roughly the same time. What made this action remarkable was the fact that 54th Massachusetts Volunteers was the first regular unit of the Union army to consist entirely of black soldiers, led by a white colonel, the son of prominent Boston abolitionists.

As an account of this event, Glory is reasonably accurate and thoroughly inspiring, built around a core of superb actors giving some of their best performances. It’s portrayal of Civil War combat is technically on par with the later Gettysburg, only more realistic and bloody, fully deserving of the film’s R rating.

The action begins with the Battle of Antietam, as a young captain named Robert Gould Shaw (Matthew Broderick) leads his troops into action. Initially, the battle goes poorly for the Union and Shaw is wounded. Later, back in Boston, he is introduced to the Governor and Frederick Douglass (Raymond St. Jacques) and told that the state of Massachusetts is raising a regiment of black soldiers and he has been nominated to lead it. He brings in his friend, the initially skeptical Cabot Forbes (Cary Elwes) to help him and takes command of the regiment. Among the volunteers are John Rawlins (Morgan Freeman), a gravedigger who first encountered Shaw at Antietam, Trip (Denzel Washington), a bitter escaped slave, the sweet-natured Jupiter Sharts (Jihmi Kennedy) and Thomas Searles (Andre Braugher), an educated free-born man and a close friend of Shaw.

One might think that Matthew Broderick, best known at the time as the sweet-faced teenaged anarchist Ferris Bueller, is an unusual choice to play a Civil War military leader, but he turns out to be an ideal choice given the character’s progression from naïve idealism to mature leadership. He is perfectly believable as Shaw grows to realize that being in command means a lot more than giving orders. When the colonel begins standing up to his own army’s racism and bureaucracy to get his regiment much needed supplies and then get them into the fight, Broderick is completely convincing, if visibly not always comfortable.

Of course, the core of this film is the four soldiers who volunteer to fight for Shaw. While Denzel Washington deservedly won a Best Supporting Actor Oscar for his performance, but frankly any of the other three actors in the primary black roles could have won. While other actors than Morgan Freeman could have played Rawlins, it is hard to imagine anyone else in the role. The character seems tailored to Freeman’s particular brand of dignity and humor. Andre Braugher, still a few years away from his career defining role on TV’s Homicide, brings the necessary humanity to the role of man whose idealism initially outstrips his abilities as a soldier.

The film is not without its flaws, however. The character of Forbes, Shaw’s second in command, is largely fictitious, and their conflict seems forced and false. Also, the scene in which Trip is flogged for desertion is both gratuitous and most likely inaccurate, given that whipping was not allowed by the Union Army and Shaw was a by-the-book officer. 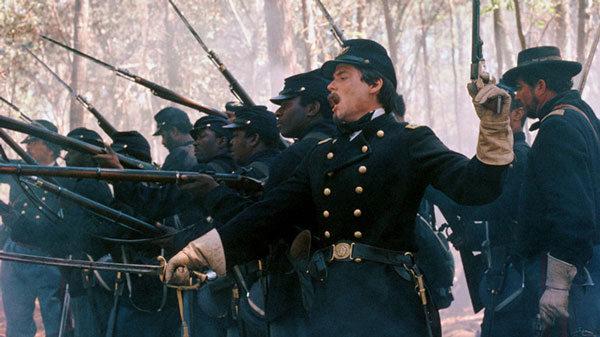 But a couple of false notes are balanced by scenes that not only make you stand up and cheer but also earn that privilege, such as when Shaw joins his men’s protest over unequal pay or when Rawlins dresses down Trip and makes a stirring appeal to the pride of all the men serving in the 54th.

Some have questioned the reason for making a white man the central character in a story about the first black regiment, and it’s a valid point to make. I would, however, offer some counterpoints. First, despite Broderick’s star billing, this seems very much an ensemble piece. Broderick’s above the title credit had more to do with his post-Bueller marketability at the time. Were this picture made today, no doubt Denzel Washington’s name would be listed the most prominently. Also, Glory is structured as a “unit picture,” a specific sub-genre of war movies with certain traditions of its own. As the story of the 54th Massachusetts Volunteers, Glory is also the story of its commander, that being Robert Gould Shaw.

Finally, the 54th’s success was as much do to one man’s ability to mold them into a fighting unit, as it always is in war, as it does with the individual bravery of the men themselves. In short, it would be difficult to tell the story of this regiment without telling Shaw’s story as well.

It is an interesting movie to watch these days, with war dragging on in Iraq and the disproportionate representation of African-Americans and other minorities a very real issue. It’s rather instructive to remember that, at one time, blacks weren’t even allowed to fight for their own freedom and, when they were, were kept separate from the rest of the army. Today, the logic of black soldiers in the American Civil War seems like common sense, since they were, in a very real sense, the people with the biggest dog in the fight. For them, losing was not an option and winning a matter of pride and survival, not political abstractions. Who else would you want fighting on your side?

All this time I keep askin' myself, when, O Lord, when it's gonna be our time? Gonna come a time when we all gonna hafta ante up. Ante up and kick in like men. Like men!