Full Metal Jacket is an outstanding film about Marine recruits in training followed by two less successful films about the Vietnam War. It begins so strong with the natural conflict between the slow-witted and unhinged Private Pyle (Vincent D’Onofrio) and the profane force of nature known as Gunnery Sergeant Hartman (R. Lee Ermey, a former Marine drill instructor himself) that the two following segments border on anti-climax.

The movie begins with a montage of young men as their heads are shorn to begin the process of basic training followed by the unforgettable introduction of Sgt. Hartman. Ermey, who largely improvised his dialog, creates a character who is a marvel of dehumanizing vulgarity. When confronted with the pudgy, incompetent and borderline retarded Private Pyle, it becomes on contest of irresistible force versus an almost immovable object. It falls upon Private Joker (Matthew Modine), a recruit who manages to earn Hartman’s grudging respect despite his sometimes disrespectful attitude, to help Pyle become something that passably resembles a Marine. Unfortunately, with Hartman continual abuse and Pyle’s already borderline psychotic state, this cannot end well.

The second part of the film finds Joker in Vietnam, working as a reporter for Stars and Stripes on the eve of the Tet Offensive. He and his photographer, Rafterman (Kevyn Major Howard), are bored with life in the rear and itching to get out “in the shit,” as the combat areas are called. This is definitely a case of being careful what you wish for. After the offensive begins, he and Rafterman are sent toward the city of Hue, where he reunites with Private Cowboy (Arliss Howard), who was also a member of Hartman’s platoon, and the rest of his squad, just before they are ordered into the city.

The second and third segments introduce a new character known only as Animal Mother (Adam Baldwin), the nihilistic machine gunner in Cowboy’s squad. He’s a sociopath who cares mostly about his own survival and sees killing the enemy as the easiest way to achieve that goal, and the film makes no secret of the parallels between this killing machine and the unfortunate Private Pyle.

The final section of the film shows Cowboy’s squad hunting a Viet Cong sniper than has killed two of their men. After a relatively inert middle, the film comes partially alive again during this surreal and violent final act, but it is too little too late. Part of the problem is that director Stanley Kubrick obviously sees this section as a microcosm for the entire Vietnam War, but the action is too limited in scope for it to be effective in that way. On its own, the final act is a harrowing combat sequence on par with the best Vietnam War movies out there, but after the film’s bravura beginning, it fails to hold up its end of the bargain.

One thing that does work better than you would think is the use of British locations to stand in for Parris Island, Da Nang and Hue, which was necessitated by Stanley Kubrick’s fear of flying. While not entirely convincing, the Beckton Gas Works manages to give the Hue segments a nightmarish quality that suits the film well.

The performances and other individual elements of the film are first rate. Matthew Modine is very effective as a young man who is probably too smart and cynical for the job he is doing. After outdoing Robert DeNiro by gaining 60 pounds for the role, D’Onofrio is so convincing as the dimwitted Pyle that, as Natalie Portman said in Garden State, it’s hard to believe he’s not really retarded. Of course, this is the film that made R. Lee Ermey a star and the attention he gained was well deserved. His performance is completely balls-to-the-wall and it’s understandable that, when you mention Full Metal Jacket to most people, Ermey is the first thing to spring to their minds.

I only wish the whole of this movie could be the equal of its first part. If it had, this could have been the equal to Apocalypse Now. When a major filmmaker like Kubrick undertakes a movie about the Vietnam war, you want the result to be something special. For the first forty minutes, Full Metal Jacket is just that. 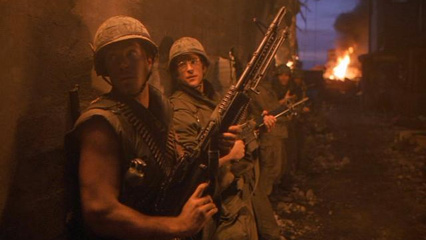