Stanley Kubrick’s acid-soaked absurdist farce about the end of the world has to stand alone among the genre of cold war films in the same way that 2001: A Space Odyssey stands alone among science-fiction films. There is just no way to compare it directly to any other film of that era, making it effectively sui generis among its contemporaries as well as any thing that’s come after.

It would be stretching the concept to say this film was based on a Peter George novel entitled Red Alert, because Kubrick’s film took the barest skeleton of the story, turned it inside out and found everything that was possibly funny about nuclear annihilation, and then went beyond even that.

Peter Sellers deserves all the praise he receives for his triple duty as the nebbishy President Muffley, the easily flustered Captain Mandrake, and the titular ex-Nazi physicist whose right hand still thinks it’s back in the führerbunker. I think that Sterling Hayden, as the unhinged General Ripper, who uses a loophole in a wartime contingency plan to order his bomber wing to launch a pre-emptive first strike on the Soviet Union, gives the film’s essential performance. His calm, authoritative demeanor, exactly what one expects from a general, a leader of men in war, makes the insanity of his words all the more chilling (and funny). His two-handed scenes with Sellers as Mandrake, where the British exchange officer desperately tries to process what he’s hearing and vainly attempts to reason with his commander, are exercises in comic beauty.

As General Turgidson, who fights to appear dismayed for his president but seems secretly delighted by Ripper’s actions, George C. Scott gives a memorably over-the-top performance, although not entirely by choice. Supposedly Kubrick had to trick Scott into doing it by secretly filming the rehearsals where the actor was encouraged to exaggerate Turgidson’s manic personality. It works but this subterfuge is why we would never see George C. Scott in another Kubrick film.

Kubrick supposed also tricked Slim Pickens into thinking he was making a serious war movie by never showing the actor scenes from script that he wasn’t in. Again, it works perfectly and, unlike Scott, Pickens was not angry and more than happy to just accept the bigger paychecks that resulted from this film. Certainly, it is Pickens’ final scene that most of us seem to remember (although he must have figured out it was a comedy by that point).

And while Dr. Strangelove gets a lot of the attention among Sellers’ performances, his scenes as the milquetoast president trying belatedly to assert his authority over the situation are moments that any actor would give his right arm to have on his or her demo reel. His one-sided conversation with the inebriated Soviet Premier is simply a deadpan comic acting clinic.

While there’s no doubt that Dr. Strangelove is a genuine comedy masterpiece, this is not the film you want to break out when you just want a few giggles. Its dark subject matter and the mere fact that it’s Kubrick film will require to think about why you’re laughing and, if you’re in the wrong mood, may have you chuckling to yourself as you dial the suicide hotline.

It’s a testament to this film that the end of the cold war has not robbed Dr. Strangelove of its power to make us both laugh and think (and laugh some more). 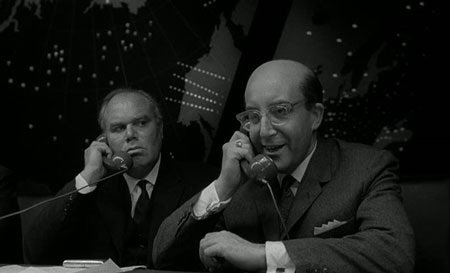 I reckon you wouldn't even be human beings if you didn't have some pretty strong personal feelings about nuclear combat.