In late August of 2003, there was a special screening of this film at the Pentagon, a few months after President Bush declared “Mission Accomplished” from the deck of the U.S.S. Abraham Lincoln. The Department of Defense was not shy about their belief that the film offered valuable and necessary insight into the problems of fighting an insurgency in the Islamic world. In short, the American military had no illusions that the fight in Iraq was far from over, even if the politicians were pretending otherwise. If you needed any other evidence that this forty-year-old film was still uncommonly relevant and current, note the film was also banned by the French for five years after its release. Clearly, the French didn’t like to be reminded of past transgressions that far outstrip anything that U.S. forces in Iraq have been accused of.

Rather appropriately for its subject matter, director Gillo Pontecorvo shot the film in a guerrilla fashion, using a documentary style and local non-actors for all but one of the key roles. The story tracks events in French Algeria and the city of Algiers between 1954 and 1960, as local resistance to French colonial rule began to take shape and organize.

The Battle of Algiers dispenses with any kind of traditional story structure and seems to just stand back and capture events as they unfold. After an opening set in 1957, in which a tortured prisoner reveals the location of last remaining leader of the FLN, the main organized opposition to French rule. It then flashes back to 1954 to reveal how that man, Ali La Pointe, went from being a petty criminal on the streets of the Casbah to a key FLN commander. After he is arrested for minor crime and sent to prison, he witnesses a political prisoner being sent to the guillotine. His anger over this allows him to be recruited by Jafar, one of the FLN’s top leaders. In the film, the men in these roles are real members of the organization playing fictionalized versions of themselves.

The FLN begins by cleaning its own house, imposing a strict fundamentalist law on the native Islamic population as a means of strengthening and unifying their people. They eventually turn to targeting the French police, whose impotence in the face of these attacks lead them to more and more drastic measures. First, they attempt to corral the Muslim population with methods that would to seem familiar to East Berliners five or so years later. When that fails, they escalate the conflict by bombing the home of a suspect FLN terrorist. The FLN responds with revenge bombings of their own.

At that point, the film shifts focus as the French send in a unit of paratroops under the command of Colonel Mathieu (Jean Martin, the only professional actor in the cast). Urbane and charming, he is also ruthlessly practical about what needs to be done. Unwilling to be hemmed in by the rules imposed on him by his policing roles, he waits for the FLN to provide some justification for his government to lift those restrictions. If the terrorists don’t cooperate, he is willing to provoke such an incident, if necessary. When the FLN calls for a general strike, the colonel senses his opportunity.

Even though the filmmakers’ sympathies are clearly with the FLN and against the French colonial rule, the film does not stack the deck. Colonel Mathieu may be an amoral villain, but he’s also outwardly likeable and not entirely unsympathetic to the goals of the FLN. Ali La Pointe, his opposite number, is severe and unsmiling. He may be fighting for his people against European colonialism, but he’s not necessarily a nice or pleasant person.

The guerrilla filming style has a few drawbacks. Given the use of amateur performers for most of the roles, it’s not surprising that the acting is very uneven. Also, it’s clear that some of the actors playing Algerians had their lines dubbed and the dubbing is not always convincing. Still, the images and the cool, unflinching look inside the workings of a terrorist insurgency give the film a power that will keep it relevant for the foreseeable future. 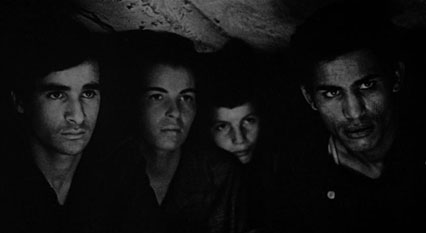 2 thoughts on “The Battle of Algiers”