Sir, exfils are like abortions. You don't wanna need one. But when you do, you don't do it yourself.

As I have said before, whatever my opinion of Ben Affleck the actor, I have yet to be disappointed by Ben Affleck the director. In my review of The Town, I jokingly suggested that he could have a fine career as the John Ford of the Boston-based crime story. Apparently, he didn’t agree. I won’t argue, so long as films like Argo are the end result.

When I was a teenager, the Iranian Hostage Crisis hung over this country like the blowback from a one-night stand gone completely pear-shaped. For 444 days, the national pride of the United States took a nightly beating. What little we knew about this small sideshow was a small boost to our collective morale.

The movie begins with a brief overview of the history of Iran, our role in installing the decadent dictator known as the Shah, and the inevitable displeasure shown by the Iranian people after the cancer-stricken despot flees the country in 1979.

A mob of angry Iranians beats on the door of the United States embassy, eventually breaking it down as the embassy staff desperately tries to destroy sensitive documents as they begin to realize that no one can come to their rescue.

Six people manage to escape the building before the mob seizes control of the embassy, and these six take shelter at the residence of the Canadian ambassador.

Back home, the U.S. State Department plans to get the six people out themselves, and bring in a CIA “ex-filtration” expert named Tony Menendez (Affleck) to consult. He picks apart their Plan A, which involves the six Americans bicycling across mountainous Iran in the dead of winter, but at first has no better plan to offer.

Only after watching Planet of the Apes does he hit upon an inspired, crazy plan. Even if America is the Great Satan to the Iranians, they are still only human, and not immune to the allure of Hollywood. Menendez proposes flying into Tehran posing as Canadian filmmaker, and fly out with the six fugitive Americans as his “location crew.”

This is the best bad idea we have, sir.

To help create a cover, meaning the illusion of actually film production, he reaches out John Chambers (John Goodman), the man behind the makeup effects for the Planet of the Apes movies, who had already assisted the agency with disguises for covert operations. Chambers sets him up with a producer named Lester Siegel (Alan Arkin). In order for the cover to work, the three man need to actually set the wheels of Hollywood in motion. They find a script and stage a media event to “promote” the film.

With the cover established, Menendez flies to Tehran. He has several obstacles to success. First, he has to hope the Iranians don’t notice he’s leaving with six people when he flew in alone. Second, some of the embassy staffers think his idea is crazy and would rather wait for a diplomatic solution, as if one were possible in their case. Third, he has to get them out before the Iranians piece together the shredded embassy files and realize that they have six fewer hostages than they’re supposed to have.

Argo works best when it focuses on the mechanics of the plan, both the fake movie production back in California and the actual action in Tehran. In order to maintain the illusion, he is forced to bring the Americans out of the residence and into the streets of Tehran on a scouting trip in order to satisfy the Iranians that the production is real.

The main deficiency is a manufactured scene where the Americans just get off the ground before the Iranians, who have discovered the ruse, can stop the plane from taking off. This is another example of Hollywood feeling the need to spoonfeed false drama to the audience.

Affleck gives a nicely understated performance as Menendez, presenting just the sort of low-key, unflappable person you expect to find in his job. He’s no James Bond, but that helps sell the idea that this is what real spycraft is like (or as close as you are likely to get in the movies in 2012).

The movie was not without its controversies for its handling of certain factual matter, more specifically downplaying the role of the Canadians in the rescue. In my review of Lincoln, I called the filmmakers to task for changing the votes of two Connecticut congressmen to gin up some extra dramatic tension. The changes to Argo are more substantial, but more necessary to telling the tale cinematically.

A spy jetting into a hostile foreign capital is a more compelling story for a movie than a bunch of people laying low while some diplomats make phone calls. The film also said that the six Americans were denied shelter by the British and New Zealand embassies when in fact both countries played a role in hiding them. However, the filmmakers correctly decided that it made a better movie if all six people stayed in one place rather than splitting up as they did in real life. If you are going to keep them them all at the Canadian ambassador’s house, then you need to explain why they stayed together when that would make them all vulnerable to capture if even one of them was found out.

So the changes to Lincoln were minor but totally gratuitous and unnecessary, while the changes in Argo are more significant but understandable.

Even if you disagree with the filmmakers’ choices, it’s hard to argue with the results in this case. 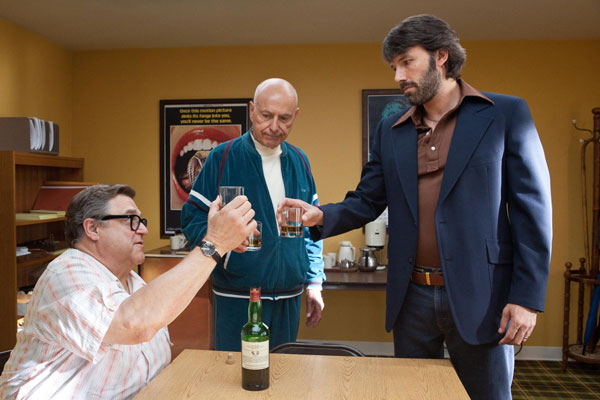