Saving Private Ryan is almost two movies in one. The first is a short but intense 30-minute piece about the Omaha Beach landings while the second is a more traditional “unit” picture running about two-and-a-half hours. Only the presence of the same actors in both ties the two parts together. Each could probably stand separately but folded into the same film, the first part helps give the second, longer narrative layers of meaning and emotional weight that it wouldn’t otherwise carry.

A whole lot has been written about the D-Day landing sequence that opens Saving Private Ryan, and deservedly so. Virtually unflinching in its portrayal of the chaotic violence of World War II combat, this sequence could easily serve as a pre-amble to almost any World War II film, or almost any modern war film. Despite its specificity in terms of place and time, this sequence has a certain universal ability to make us appreciate the level of sacrifice committed by those who have fought for their country.

The real accomplishment of that first thirty minutes is that it manages to find resourcefulness and courage in the middle of almost indescribable horror. By the end of that sequence, surrounded by piles of mangled bodies, a band of hastily organized survivors has found a way to do what they came to Omaha Beach to do. This sequence could simply have been about the senselessness of war, but Steven Spielberg made it about the men who managed to make sense of it.

After that eye-opening, emotionally taxing beginning, almost anything else is probably going to seem like a letdown. The second real accomplishment of Saving Private Ryan is that the main narrative is less of a letdown than it could have been in lesser hands. Some have criticized this film because they felt that rest of the film is just a run-of-the-mill war movie and this somehow sullies the purity of that beginning. These critics are missing the point because I believe that the traditional structure of the story is exactly the point. Spielberg has taken the familiar format of the war movie and used the blood-soaked opening to give it a context that previous war films have really lacked, because the audience has never before been able to peek into the nightmare that forms the soldier’s universe. 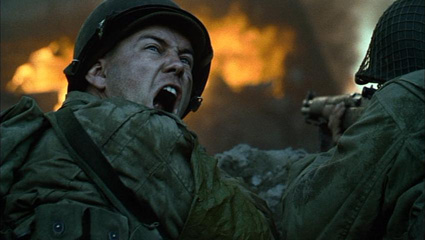 Another routine criticism that has been leveled at this film is the politically correct canard that this is just another Hollywood movie about the U.S.A. winning World War II single-handedly. Where are the British? Where are the Canadians? Well, they were at other beaches, namely “Sword,” “Gold” and “Juno,” and thus well outside the scope of the film. Not even the Americans at Utah Beach were portrayed, but no one complained about leaving them out of the movie. It really frosts me that a filmmaker is somehow expected to abandon the film he or she wants to make to assuage other people’s hurt feelings. Saving Private Ryan is about a squad of Army Rangers who landed at Omaha Beach. The chance of them running into British or Canadian soldiers during the time frame of the story was virtually nil and that should be that.

And the framing scenes around Saving Private Ryan are emotionally valid given the entirety of the movie. I do question the necessity of the very last exchange of dialog. The final question, and its answer, is obvious and Spielberg should have trusted the audience to make the connection.

But that is a minor quibble that doesn’t stop Saving Private Ryan from being easily the most important war movie since All Quiet on the Western Front. 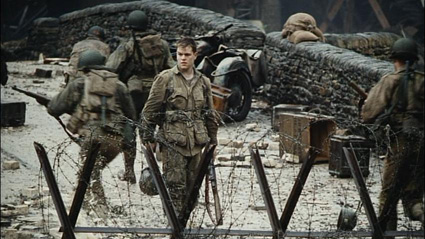