Eighty-seven years after they founded this country with the institution of slavery still intact, the country celebrated the Fourth of July in the bloodiest way possible in any effort to resolve that question. The Turner Network’s film of the decisive Battle of Gettysburg is a rigorously faithful adaption of Michael Shaara’s novel The Killer Angels

. Perhaps they were a bit too faithful. This movie occasionally suffers from a little of what I call “The Longest Day Syndrome,” which is the tendency for characters to pontificate on the importance of the events in the film as if they were reading from, well, the pages of Michael Shaara’s The Killer Angels.

Fortunately, the words are well written and actors entrusted with them are no slouches, so the dramaturgical sin is a menial one and when the people stopped talking and start shooting at each other, this movie is like porn for Civil War buffs. The largest battle ever fought on U.S. soil is restaged for the cameras with an eye for accuracy and detail, using thousands of re-enactors who serve simultaneously as extras and de facto technical advisors. Other than a lot of Confederate soldiers who look a little too well fed compared to their real life counterparts, this gives the movie a remarkable level of realism. Of course, this movie was originally made as a television miniseries, so the level of violence is somewhat sanitized, but director Ronald Maxwell compensates with effective use of sound, movement, smoke and general chaos to suggest what he cannot show.

The film divides the battle into its three days and focuses on a single key personality to tell the story of that day. The first day’s story is John Buford (Sam Elliott), the Union cavalry commander who first encounters the Confederate forces converging on the small Pennsylvania town and holds them back long enough to allow the main Union force to get into position. Having probably played more cowboys, soldiers and other 19th Century tough guys than any other actor, Elliott seems like he was born into this role.

The second day belongs to Colonel Joshua Lawrence Chamberlain (Jeff Daniels), commander of the 20th Maine Regiment, which gets charged with defending the far left end of the Union lines on hill called Little Round Top. Supported by his brother, Thomas (C. Thomas Howell) and a fiercely loyal sergeant, Buster Kilrain (Kevin Conway), he and his already depleted unit fend off wave after wave of Confederate attackers until, exhausted and out of ammo, they turn the tables on the Southerners with a desperate bayonet charge. Daniels gives a sharply realized portrayal of an educated humanist with a talent for leading men in battle.

The third day, which dominates the second half of this movie, is primarily the story of Confederate General James Longstreet (Tom Berenger), who is the Robert E. Lee’s (Martin Sheen) most trusted commander. Longstreet knows that the South should have skirted around the Union lines toward Washington and forced the Federal forces to attack on ground of the Confederate’s choosing. He’s certain that Pickett’s Charge is doomed to fail but honor and duty require him to follow General Lee’s orders. Berenger brings a level of humor and humanity to the role that makes Longstreet’s pain over these decisions very real to the audience.

One problem with the structure of this movie is the simple fact that Chamberlain’s defense of Little Round Top is such a draining but exhilarating sequence that the second half almost feels like an anti-climax. This is partially the fault of history but the Pickett’s Charge sequence is vast and impersonal compared to the very personal intensity of the previous day’s fighting. Director Maxwell effectively uses the scale of day’s fighting to compensate somewhat, however.

Other than those three key figures, a few other personalities stand out from the rest. As the flamboyant General George Pickett, whose division was decimated by Lee’s ill-considered attack, Stephen Lang throws himself, body and soul, into the part. As Harrison, the actor turned Confederate scout, Cooper Huckabee obviously has a lot fun with his role and it comes across on the screen. Irish actor Brian Mallon injects General Winfield Scott Hancock with the requisite charisma for the most visible Union leader in the film. As Hancock’s old friend, Lewis Armistead, one of Pickett’s brigade commanders, Richard Jordan brings a touching humanity to his final role before he died of cancer. Already ill when he made this movie, Jordan’s sense of his own mortality seems to really help him connect with the character.

My main complaint is that the connection between Armistead and Hancock, two old friends on opposite sides of the same battle, is overplayed. We get the point well before the movie stops whacking us over the head with it.

Another flaw is the casting of Martin Sheen as General Lee. He’s obviously a superb actor but he’s just wrong for the role. He manages to make Lee’s Southern courtliness seem like senile dottiness instead. Robert Duvall was much better cast in the role for the otherwise forgettable prequel, Gods & Generals

One of the unfortunate byproducts of this film being made for television and then released into the movie theaters was that the makeup artists did not know that the actors would be projected ten feet high on the big screen. Virtually every actor is required to wear some kind of false beard or mustache (except maybe Sam Elliott, who always looks like it’s 1860 anyway) and, while they are adequate for the small screens of 1993, their flaws are glaringly obvious on theater screens (and 50-inch plasmas as well). If you can look past this limitation, the illusion of 1863 otherwise holds up pretty well.

As drama, Gettysburg is too long, especially the second half, but as a dramatization of history, it is invaluable for any student of the American Civil War.

We should have freed the slaves, then fired on Fort Sumter. 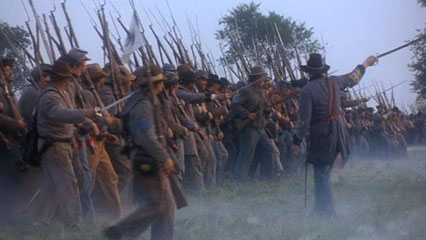